Characterised by the burning desire to ‘collect’ – i.e. reach the summit of – every hill on a given list, hill bagging is a quintessentially British hobby, and the last adventure on my list.

I boarded a plane to meet the baggers in Northumberland with a head full of Autumn mucus, a little worried by the prospect of a weekend climbing hills in the biting north.

“Oh come on!” Gary had said to me the night before. “Going walking with a bunch of middle-aged men – how hard can it be?”

I showed him an article regaling six baggers’ recent ascent of Stac Lee, a sea stack 81 miles west of the Scottish mainland. The group are kitted out with climbing ropes, harnesses and helmets as they leap from their chartered boat onto the barnacle-covered rocks to begin their climb. This was serious stuff.

“You’ll be fine,” he said, sounding much less confident this time round.

Hill bagging terminology is a complicated issue. Most hill lists have a name, like the ‘Munros’ of Scotland, with summits of at least 3000 feet, or the 214 ‘Wainwrights’ of the Lake District.

The definition of a hill is a question addressed by Alan Dawson in his book The Relative Hills of Britain, otherwise known as ‘the hill baggers’ bible’. For Alan, a hill should be defined in relation to its surroundings – i.e. how much it drops down on all sides – known as its prominence or ‘re-ascent’. Based on this, Alan identified 1556 British hills that have at least 150 metres of prominence, dubbing them the ‘Marilyns’.

After a two-hour drive into the heart of nowhere, I turn up to meet the group – who have each ascended at least 600 Marilyns – gathered to help Rick and Jen to celebrate the ascent of their final English Marilyn.

I emerge from my shiny rental car in Cotton Trader boots and a white jacket to find the men contrastingly clad in expert walking gear, complete with poles and rucksacks.

“Erm, do you have any gaiters?” Rick asks me.

The men laugh. I turn the colour of my boots.

I am assigned to Rob Woodall for a day’s ‘tump’ bagging (thirty metre prominence hills). I feel like I am in the presence of a celebrity; last month Rob became the first man to complete the entire set of Marilyns, a feat worthy of the national news. “What is the highest number of hills you’ve bagged in a day?” I ask him as we pull away in his blue Skoda for the days adventure.

“Well, the The Paddy Buckley Round has 47 hills, including Snowdon, so I guess that’s the most. It’s a 60-mile run over 24 hours”.

Now a little nervous about having to climb hills with this superman, you can imagine my relief when I discover that our first hill of the day is a ‘drive-up’; getting as near to the top as possible by car, and walking the short distance to the summit. After locating the summit with the help of a map and GPS device, and taking a photo, we head back in the car for our next bag.

Seven tumps later, the crew of 22 baggers meet for dinner and a debriefing session. I talk to Alan (author of the hill baggers’ bible) as bottles of whisky are passed around.

“Some hill baggers worry that what we do is a bit sad”, he says. “But I ask them, ‘What’s the alternative? Going to the pub every night? Shopping? Watching reality TV?’ I think that’s sadder”.

With that, he plugs his laptop into the TV for a baggers’ karaoke session – a Daydream Believer cover with a backdrop photo of Stac Lee. The scrolling lyrics have been changed to pay homage to those who made the climb earlier this year.

“Climbing up Stac Lee would not frighten me. I’m a daydream believer in a summiting team,” is followed by a similar version of Fairytale of New York; “Your whinging and nagging is spoiling the bagging”.

Nursing fuzzy heads, we meet the following morning to take on the big one – Peel Fell – a Marilyn on the border with Scotland. After a short amble up a gently sloping forest path, we are forced to head off-piste through the forest for a more efficient route to the top, thrashing our way between the branches, leaping over a couple of ditches and crossing a boggy trench. Then the real climbing starts. Every time we get over a ledge I think is the top, another bump miraculously appears in the distance. I begin to question what on earth I have let myself in for.

We finally make it to the summit, and, as always, the exquisite views make the toil to get here instantly forgettable. Alan gets out his expensive surveying equipment to measure the height at the summit, while Rick and Jen ceremonially hold hands and ascend the highest point together to cheers from the group. I do the same. At the summit of my very first Marilyn. The feeling is euphoric.

Cake, more whisky and plastic cups appear ceremoniously from a backpack. We drink an entire bottle between six to stay warm on the blustery top as the rain starts to descend.

Once his surveying is complete, Alan rushes back over to the group.

“We forgot a very important toast!” he says in a mild panic. “Everyone get your cups back out”. He pulls another bottle from his backpack and fills us all up.

We raise our glasses as Alan makes his toast; “Here’s to completing the last letter of Alphabet Britain!”

I swell with pride, full to the brim with love for this gently eccentric group, for all of the people I have had the privilege to spend time with this year, and for the eclectic, unique and beautiful island I call home. 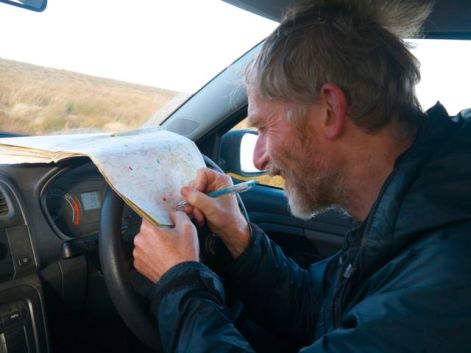 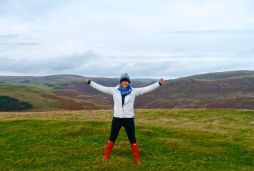 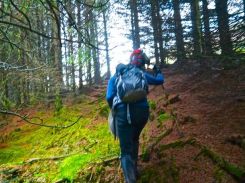 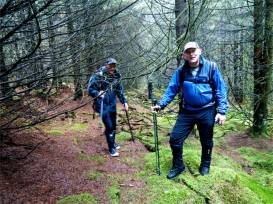 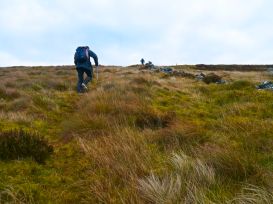 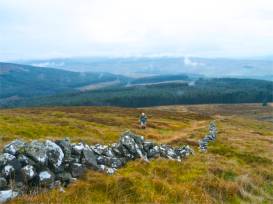 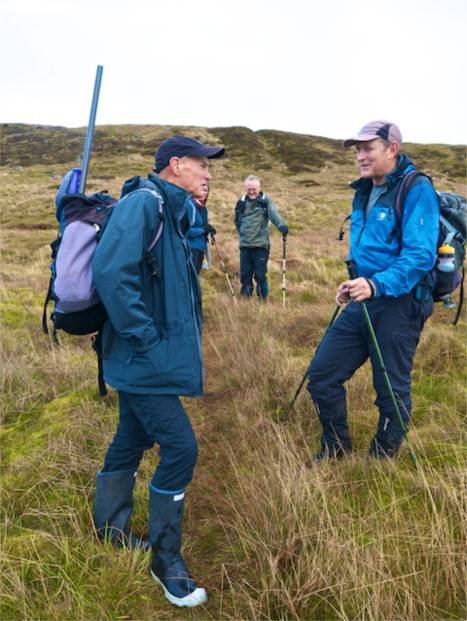 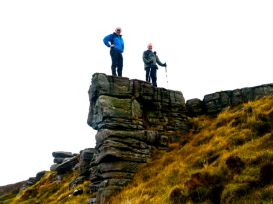 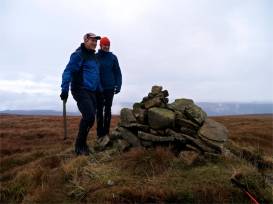