I have never really understood the fascination with trains, so I can’t say this was a chapter I was particularly looking forward to. I can appreciate the nostalgic beauty of an old steam train chugging through an emerald valley – there is something romantic about that – but the 08:14 from Liverpool Street station just doesn’t have quite the same appeal.

My initial schooling on the subject was from Eric, a train enthusiast and evangelist. Eric has loved trains since his earliest memory of holidays in Europe, when all he wanted to do was take pictures of his three loves – trains, trams and trolleybuses. It got to the point where his parents had to confiscate his camera.

“I have been stopped by police a few times for taking photos”, he tells me, “but when they realise I am a train spotter they run a mile.”

After a three-hour chat, Eric and I arrange to meet a week later for an ‘event’ – the final running of the c-stock (old underground trains) on the Metropolitan line.

I arrive to find Eric poised with his camera, ready to film the last ever 11:15 c-stock from Baker Street. Next to him are three other men holding cameras. Suddenly one of them points across the station, “Look, there she is, coming into the loading bay”.

Panic descends and everyone runs across to the other platform. Suddenly about 20 other men appear out of the shadows to join the ruckus. They all scrabble for the best view, pushing each other out of the way in silence. Most are wearing shirts with cardigans or fleeces and neutral coloured trousers. There are no women.

Later that day I have a coffee with Geoff, one of the younger members of the enthusiast crowd who was filming the ‘event’ for the British Transport Museum.

“I have something amazing to tell you,” he promises me, followed by a dramatic pause. “I hold the world record for travelling through every tube station in the fastest time possible… 16 hours, 20mins and 27seconds!”

The ‘tube challenge’, recognised by the Guinness World Record Association, is over 272 tube stations excluding the DLR and over ground. Geoff has held the record twice now, having made 25 attempts in total, accompanied by his committed support team who bring him food, track delays and plan toilet stops (sometimes involving empty bottles). The team spend months creating code to work out the quickest possible route before an attempt is made, factoring in meticulous detail such as the gradients between each transfer.

“You have to get yourself very fit to run between the ends of each line”, he tells me, “for example, when you get to the end of the Piccadilly line at Cock Fosters, the next logical place to start is High Barnet, but it’s 5km away. So we run it. We have to do fitness training together and we wear proper running gear on the day”.

A few weeks later I accompany Eric’s friend Peter on the 390 134 to Manchester Piccadilly for a days trainspotting.

Peter walks through the carriages, inspecting every seat before leaping into one of them and wiping the window furiously with a napkin. “I always keep one of these with me to clean the windows,” he tells me, holding it up as proof.

Peter has been train spotting since he was a young boy. Each year they publish a book containing the numbers of every train in the country, so he is able to keep track of what he has and hasn’t’ seen. As we travel he holds a GPRS device up to the window so he can monitor our speed, simultaneously writing down the numbers of each train we pass.

He has collected almost all of the numbers in the UK now and carries around a leather wallet containing details of the remaining few, divided across 3 separate ‘hit lists’:

1) Spotted (and taken down the number)

2) Photographed (and collected into an album)

When we arrive in Manchester we stand at the end of platform 14 and get straight to work analysing what is pulling in and out of the station. “Rats” Peter says repeatedly when the only trains that pass us are those he already has.

There are seven other men scattered around the platform, each standing alone, adorned with camera and pad.

After an hour of spotting, Peter’s eyes light up as two adjoined trains on his haulage hit list pull in to the platform. He rubs his hands together and grins. We run down the platform to board the 350 402 at the back, walk down past the cab, and into the 350 404. “I can count it as two separate haulages now”, he says triumphantly, as if he has found a way to cheat the system.

On the way back to Piccadilly we pass the 170 303, a train that Peter desperately needs for a photo. He looks crestfallen. We spend another hour looking out for it when we’re back, before reluctantly boarding the 139 008 to London so that Peter can be home in time for Coronation Street.

Then, just as our train is about to pull out, the elusive 170 303 passes us on the other side of the station. Peters looks resolute and points in the direction of the train, “I’ll get you next time,” he says. 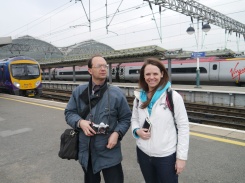 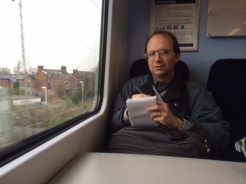 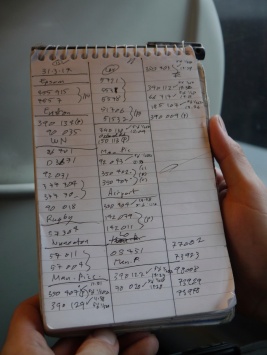 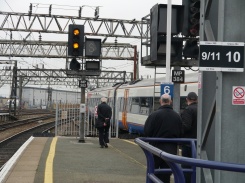 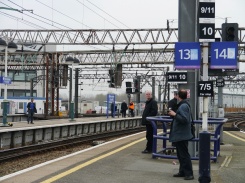 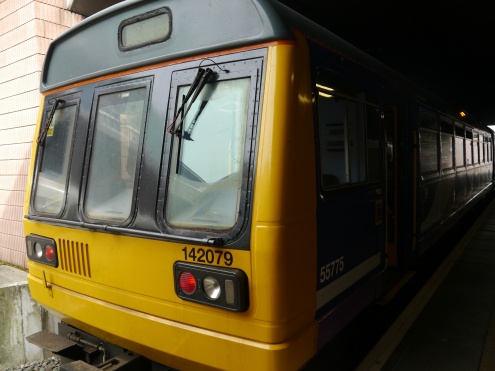 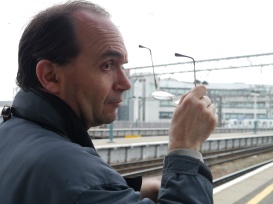