Chapter One; At the Dogs

I had been Greyhound racing only once before in my life – for a friends birthday at Wimbledon a few years earlier – and my only memories were of eating fried chicken out of a plastic basket, and feeling ever so slightly out of place.

This time round and I had a very different experience. After a whistle-stop tour of his kennels in North-West Kent, I was driven to Crayford racetrack by Barry O’Sullivan, one of the countries leading Greyhound trainers. Our fellow passengers were nine excitable Greyhounds, housed in snug crates in the back of the van.

Barry trains over 100 dogs for owners based across the country, and is contracted to provide 35 dogs a week to race at Crayford. The kennels behind his house are the biggest in the county, fully equipped with big ‘turn out’ pens, a doggy swimming pool and a full size practice track.

The sport has changed a lot over the years. Just after the Second World War it was the most popular spectators sport in the country, drawing crowds of up to 50,000. Now most of the tracks have shut down and the sport has slipped to number three in the nations heart, falling behind football and horse racing, and with only 25 functioning tracks remaining.

Given the above, I am surprised at how busy Crayford race track is this evening, especially given the time of year. The place is buzzing. Children run around causing havoc while groups of young men and women huddle together in groups dressed for a night on the town, drinking beer and alcopops.

“It used to be all about the dogs”, I am told by Steve who once worked at Barry’s kennels, “people were so passionate about them. But now it’s mainly young people who come here, and the dogs are just entertainment for them while they drink”.

This annoys a lot of the old timers, but they swallow it because without the support of the younger generations who use the tracks as a place to socialise, the tracks probably wouldn’t survive.

Barry describes his evening as ‘pretty unsuccessful’, with one winner and a hand full of places. He has very high standards as a trainer and is accustomed to winning, notching up nine victories already this week.

I return to his kennels the next morning to watch the dogs go through their training schedule. A greyhounds day starts at 6:30am when they are given their breakfast and let out into the paddocks in groups while their kennels are cleaned. Then they will be galloped round the track, swam if they need it, groomed, let out two more times and then fed again before bedtime.

“How do you ‘gallop’ a greyhound?” I ask Barry.

“Easy mate. One man stands at the top of the field and one stands at the bottom and we just take it in turns calling ‘em”. I laugh, Barry looks at me and joins in. I like that he calls me mate.

Greyhounds have a natural instinct to chase but they need to be taught how to take corners properly, how to jump hurdles and how to run out of traps. All of which they typically teach themselves, it just takes time, tactical positioning and a lot of repetition.

Later in the afternoon a few other trainers come up with their dogs to run them around Barry’s track. It’s endearing watching these men with their dogs and I am surprised by how much affection they show them.

One of the trainers goes out to retrieve his dog who has decided to lay down in the trap for a sleep, completely ignoring the hare as it zooms passed. “She is just a bit confused that’s all”, he says as he leads her back over. “She’ll get there. Won’t ya girl?” He rubs her head vigorously and she jumps up to lick his face.

At the end of a Greyhounds racing career, they will go onto a waiting list for a place in a rehoming centre. Barry has a rehoming centre called ‘DunRunnin’ attached to his kennels which houses around 25 retired dogs looking for new homes.

“They make great pets,” I am told by Karen, the lady who runs the centre.

“Are any of them too vicious to rehome?” I ask her, eying up a muzzle on one of the dogs she is holding.

“No – it’s almost unheard of to find a Greyhound that is aggressive to humans,” she reassures me. “Oh”, she follows my gaze, “they are only muzzled so they don’t hurt each other because they’re so valuable”.

“What happens to the ones you can’t find homes for?” I ask, fearing the worst.

“They are all at home on my sofa!” she says, rolling her eyes.

I am sat in the kitchen of Terry and Jane Williams, a friendly middle-aged couple and the owners of Somerset One Loft Race; a 1000 berth pigeon training loft. Pigeon owners (‘fanciers’) send their birds to Terry at just 28 days old when he becomes responsible for their care and training for a one-off fee of £100 per bird.

“They arrive in a little box, and we learn ‘em how to walk, how to feed, and how to fly”, Terry explains in his charming West Country accent.

“When they’re 40 days old, we start training ‘em to go in the baskets and fly into the traps. It’s all done with food. We take ‘em down the garden and let ‘em fly back into the lofts, then we take ’em 5 miles, 10 miles, 20 miles and so on, building ‘em up like”.

Tomorrow is a big test for the pigeons who will be released (‘liberated’) from Kent to race the 122 miles back home. This is all building up to the final race of the season in August, from Ypres, Belgium (300 miles as the pigeon flies!) This year it is a flight of remembrance to mark the centenary anniversary of The Great War.

“Everyone comes up ‘ere on the big race day”, Terry explains excitedly. “We ’ave 500 pigeon people – rich, poor, women, kids, millionaires, people on the dole, people in caravans. There is a whole mixture of life becoming one community, ‘aving a laugh and a joke together, until the first pigeon appears in the sky from Belgium. Last year it was all loud and jovial, then someone shouted ‘pigeon’ and it was coming over the trees, a little dot about a thousand feet up. Then it all went silent”.

“You could hear a pin drop”, Jane interjects affectionately, enjoying Terry’s rendition of the story.

“Then the pigeon circled and dropped down and the crowd erupted. They didn’t care whose pigeon it was, they threw their caps in the air and – ‘rrraaayyy’ – they all cheered ‘coz that little pigeon had the bravery to come all that way by itself. Twenty minutes in front of the others it was. We had Scottish people down – ‘ard as nails they were – and they were so moved by the heart stuff of that little pigeon, they had a tear in their eye. It was incredible!” he beams at the memory.

Pigeon racing is typically, though not always, a blue-collar workingman’s sport, (the queen has a royal loft!). The ‘cloth cap and whippet’ pigeon fancier – picture Jack Duckworth – is still there, but is gradually dying out. There used to be 300,000 fanciers in the UK; now it’s dwindled down to about 30,000 and the sport in this form continues to decline.

I ask Terry about a day in the life of a pigeon while he gives me a tour of his lofts. The place has a relaxed and organised feel. The grounds are immaculately manicured, sitting just over the hill from the Glastonbury Festival in the otherwise sleepy village of Pilton.

“We clean ‘em out at 5:30 in the morning. Then we let the pigeons out to fly around, stretch their wings and ‘ave a bath” he tells me.

These pigeons aren’t different breeds to the ones on the street, but they are ‘the Olympic athletes’ of the pigeon world; bred for speed, fed a very specific diet and trained hard

“Then I’ll drive ‘em up tonight, park up and give ‘em a long rest. I open the curtains on the van at about 5 o’clock to let the light in – they’re all asleep” – he makes a snoring noise – “snoring away in bed, ya know? Then suddenly the door opens and they’ll all wake up and start cooing. By about half six the noise gets really loud. Banging on the doors, jumping up and down” – he puts his pigeon voice back on – “ ‘Let me out. Grrr. Let me out!’ ”

The following morning I get up ridiculously early and meet Terry at 6am for the liberation in Kent. Low hanging cloud delays the release (cloud can panic the pigeons), so we sit in the van, drink coffee from a thermos flask and put the world to rights for three hours while we wait for it to clear.

By 9:30 the sky is bright blue and I stand back to video the release. Terry pulls down the lever and the pigeons fly from their baskets, meeting as a group in the air and circling a couple of times to get their bearings. Within 5 seconds they turn into dots and disappear over the trees … 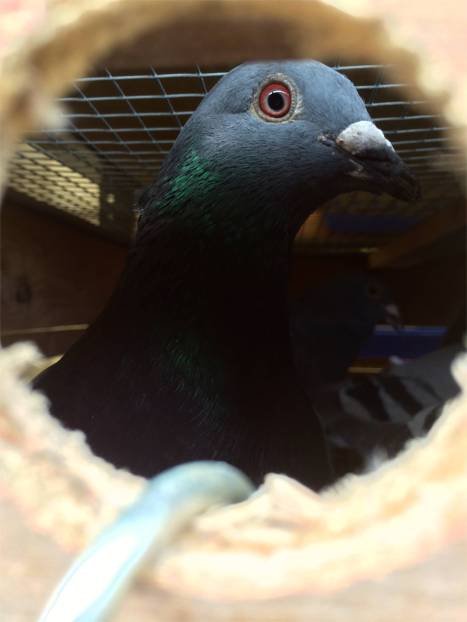 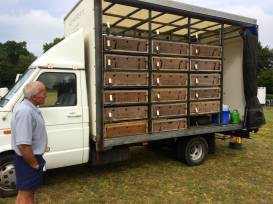 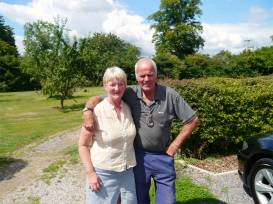 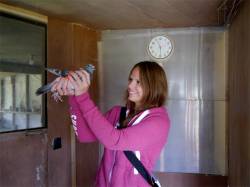 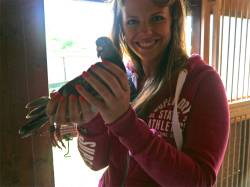 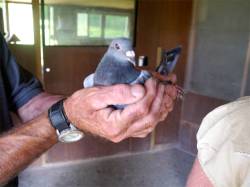 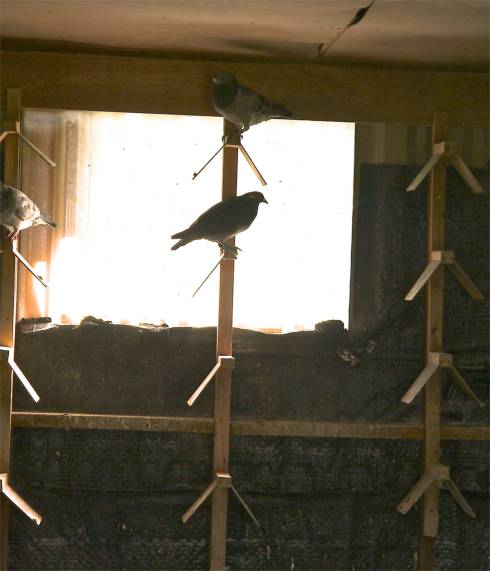 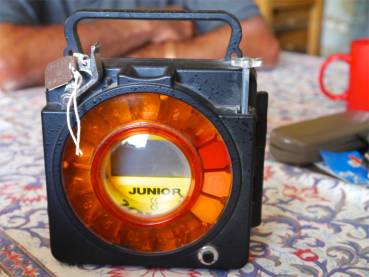 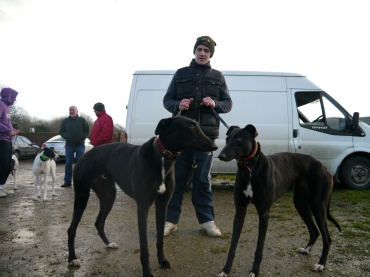 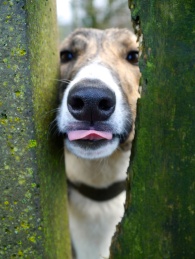 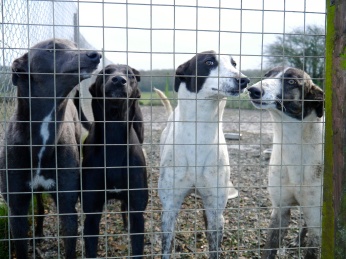 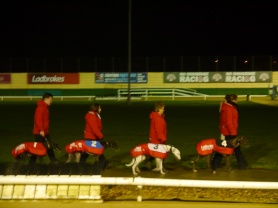 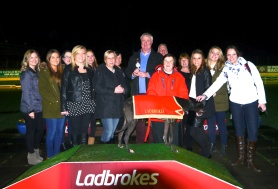 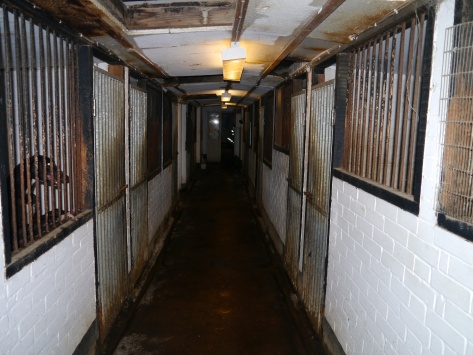 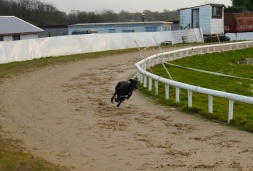 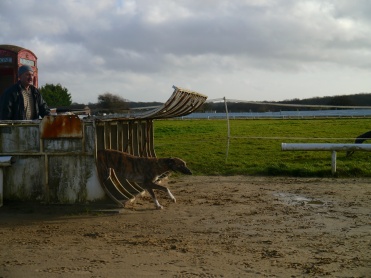 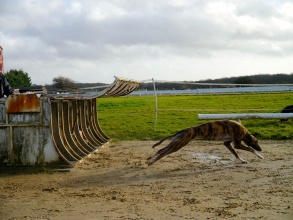 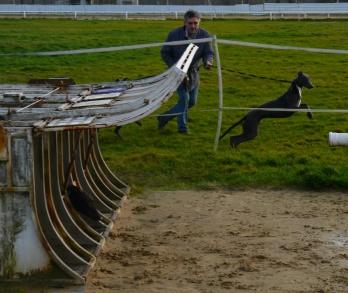 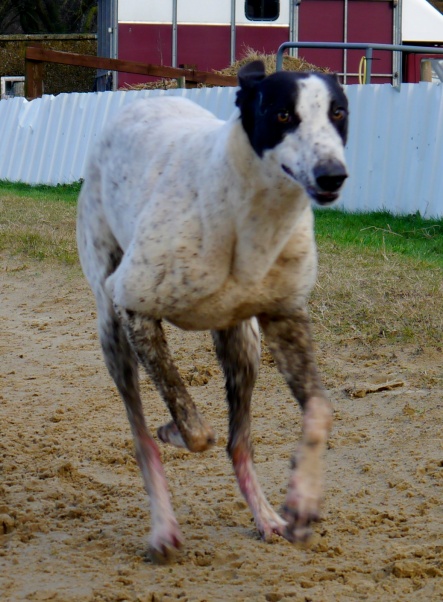 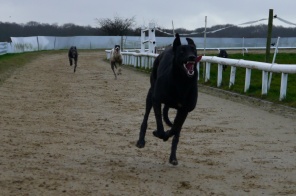